According to the data released by the CLUCC, the cumulative sales volume of narrow-sense passenger vehicles in China reached 24,216,999 units in 2017, an increase of 2.2% year-on-year to 23,697,523 units in 2016. Among them, in December the wholesale sales of narrow passenger cars in the Chinese automotive market reached 2,598,432 units, which was a decrease of 0.4% from 2,609,890 units in December 2016 and an increase of 1.7% from 2,554,114 units in November. Due to the reduction of the preferential tax rate for purchase tax, the growth rate of production and sales of passenger cars in 2017 has slowed down, which is the lowest level of annual growth since 2008. The adjustment of new energy automobile policies also has a certain impact on sales throughout the year. From the perspective of the whole year of the auto industry, the growth rate of production and sales is slightly lower than the forecast of 5% at the beginning of the year, but sales volume in the same period of the year kept rising on the basis of high base last year, showing a steady growth as a whole.

At the end of the year, in the general environment where the overall automotive market showed steady growth, a number of car companies grew rapidly in 2017. Specifically, of the 83 automobile enterprises included in the statistics, 46 have shown a growth trend, 32 have fallen, and 5 have no sales in the same period. SAIC Volkswagen, SAIC General Motors, and FAW-Volkswagen remained ranked the top three in the year. Six companies including Guangzhou Automobile's Mitsubishi Motors, Dongfeng Renault, Hantec Automotive, Zhidou Electric, Fujian Daimler and BYD Daimler increased by more than 100% year-on-year. The highest-speed auto companies were Beiqi New Energy, Jiangling New Energy, and Speed-to-Speed â€‹â€‹Vehicles, which increased by 1,876.8%, 1,744.8%, and 1,159.6% year-on-year respectively. However, there are also some car companies with poor performance in the year, such as Changan PSA Peugeot CitroÃ«n fell 63.7% year-on-year, Beijing Automotive Manufacturing Plant fell sharply from last year's 8,983 to 3,348 vehicles ... From this statistical data, 2017 independent car prices performance Outstanding, the overall growth rate is higher than the overall level of the market, and it has become an important force driving the growth of the auto market in 2017.

As for the specific situation, Gasgoo has carried out comprehensive statistics according to the official data of the association and automobile enterprises, and compiled it as follows: 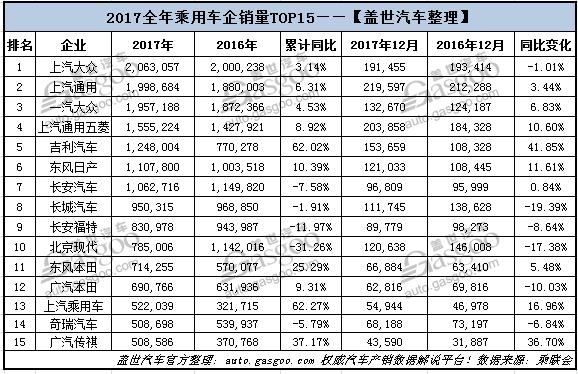 From the perspective of overall sales of passenger vehicles, TOP15, the top three rankings in 2017 remained unchanged, and SAIC Motors once again exceeded 2 million units in 2016 to 2,063,057 passenger vehicles of the year in 2013, an increase of 3.14% year-on-year; SAIC General Motors also It was approached by 2 million vehicles, with sales of 1,998,684 vehicles and an increase of 6.31% year-on-year. FAW-Volkswagen sold 1,957,188 vehicles, an increase of 4.53% year-on-year, ranking third. The cumulative sales volume of SAIC-GM-Wuling, Geely Automobile, Dongfeng Nissan and Changan Automobile, which ranks from 4 to 7, are all over one million.

It is worth noting that Geely Automobile, SAIC Motor, GAC Chuanqi and Dongfeng Honda have become the four dark horses of 2017 with eye-catching increases of 62.02%, 62.27%, 37.17% and 25.29%, respectively. Among them, Geely brushed out 1,248,004 units to reach a new annual sales volume, and successfully entered the ranks of the million-dollar car makers. Dongfeng Nissan, which surpassed sales of 1,107,800 units, soared to the top five; SAIC Passenger Car and Guangzhou Automobile Chuanqi took 522,039 and 508,586 units respectively. Sales volume has ranked among the top 15 of the year. Dongfeng Honda, which ranked 15th in the previous year, rose to 11th in sales of 714,255 units in 2017.

It is worth mentioning that, in 2017, the automakers of their own brands made remarkable achievements. In addition to Geely Automobile, Changan Automobile and Great Wall Motor, which were ranked in the TOP15 list in 2016, SAIC Motor, Chery Automobile and GAC were added. The three Chuanqi, a total of six independent brand car companies beyond the joint venture brand to enter the TOP15 ranking list.

At the same time that most car companies achieved a good harvest, some car companies were quite lost. In 2017, the sales volume of Beijing Hyundai, Changan Ford, Changan Automobile, Chery Automobile and Great Wall Motor all declined from the positive growth of the previous year, which was a decrease of 31.26%, 11.97%, 7.58%, 5.79% and 1.91%, respectively.

The CLUCC pointed out in the relevant report that due to the buoyant expectations of the auto market in 2016, which led to a steady increase in wholesale volume at the end of January 2017 that is increasing positively, it is necessary to secure a good start in January of 2018. . In the middle or late December of 2017, there was still a strong buying trend, and the production capacity of some mid-to-high-end models was limited. In December, the production and sales were not strong. In January 2018, the dealers' inventory restocking efforts will remain large. New energy vehicles will contribute nearly half to the steady growth of the auto market in 2017. In 2017, new energy vehicles will bring in more than 200,000 increments, contributing half of the increase in passenger vehicles, bringing a one-point increase for the auto market. 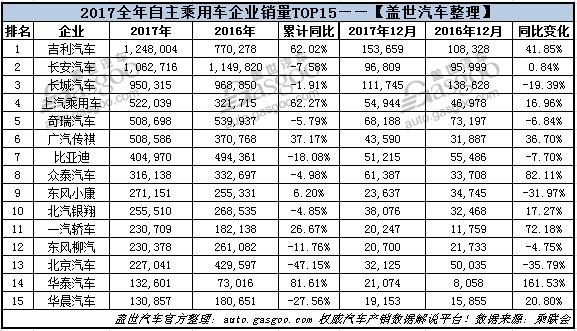 From the standpoint of independent vehicle manufacturers, Geely Automobile took over 185,288 vehicles to take over Changan Automobile as the new head of its own brand. Geely achieved sales of 1,248,004 vehicles in 2017, an increase of 62.02% year-on-year, exceeding the annual sales target of 1.1 million vehicles. Become the most attractive highlight of 2017 car companies. After breaking through one million cars in 2016, Changan Automobile retired to 1,062,716 sales in 2017. In 2018, Changan Automobile will accelerate the market distribution of third-generation products to usher in an era of new generation, and strive to regain the top spot. Great Wall Motor's passenger car sales in 2017 also approached one million, reaching 950,315 units, ranking third in its own brand. The Great Wall Haval SUV has sold a total of 851,855 vehicles throughout the year. Sales of VY7 and VV5 under the â€œWEYâ€ continued to leaps over 10,000 growth. In December, â€œWEYâ€ sold 21,349 units, an increase of 4.3% month-on-month, and continued to push up the sales of the Great Wall. In 2018, with the gradual improvement of the new product portfolio after the launch of new Haval H6 and WEY VV6, overseas market expansion and enhanced market risk resistance, Great Wall Motor's market sales are expected to have new breakthroughs.

In addition to the autonomous top three, SAIC Motor, Guangzhou Automobile Chuanqi, Dongfeng Xiaokang, FAW Car, and Huatai Automobile all have better performance. SAIC Passenger Vehicle sales in 2017 increased by 62.27% year-on-year to 522,039 units, and the ranking on the independent list also jumped from the eleventh place in the previous year to the fourth place. SAIC Motorâ€™s star product, the Roewe RX5, has become a star performer and has become the biggest contributor to SAIC Motorâ€™s passenger car sales. The Roewe RX5 fuel version, the plug-in hybrid Roewe eRX5, and the pure electric Roewe ERX5 are used to create the highest score. The sales volume has stabilized at around 25,000 for several consecutive months. SAIC's autonomous passenger vehicles have become SAIC Motor's most important growth point in 2017.

In addition, Huatai Motorâ€™s self-ranked number 24 sales in the previous year amounted to 132,601 units in 2017, which rose by 10 places to 14 places with a large increase of 81.61%, and successfully ranked among the top brands in its own brand.

At the same time that the above-mentioned car companies achieved impressive sales, we also noticed that some auto companies such as BYD, Beijing Automotive, Brilliance Automotive, Dongfeng Liuzhou, and other companies had a poor performance. Among them, Brilliance Automobiles continued the previous year's decline, increasing its decline from 1.7% to 27.56% year-on-year. BYD and Dongfeng Liuzhou Automobile Group saw a year-on-year growth of 17.88% and 11.76% from the previous year's positive growth, and Beijing Automobile was 46.8% from the previous year. The increase reversed the fall of 47.15%, ranking out of the top ten. 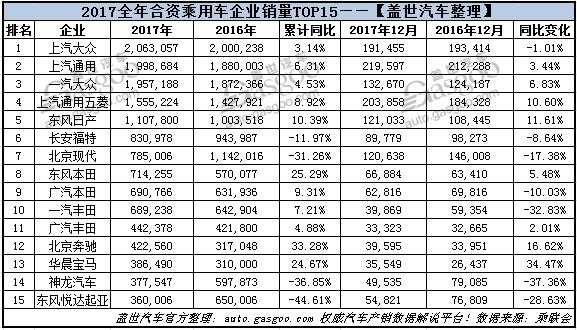 From the perspective of TOP15 sales of joint venture passenger vehicles, compared with 2016, the year-on-year decline in the number of companies in addition to Shenlong Motors, the new growth Anfu Ford, Beijing Hyundai, Dongfeng Yueda Kia to four. Among them, the decline of Shenlong Motors further increased from 15.2% in the previous year to 36.85%. Chang'an Ford and Beijing Hyundai Motor's positive growth from the previous year dropped by 11.97% and 31.26% year-on-year, respectively. Dongfeng Yueda Kia Motors was 44.61% larger. The magnitude fell from the tenth to the fifteenth position of the joint venture.

Beijing Hyundai Motors, Dongfeng Yueda Kia and other Sino-Korean joint-venture car companies have experienced a larger decline compared with the previous year. On the one hand, as China's auto market matures, the domestic self-brand offensive is swift and violent. On the other hand, consumers are increasingly demanding automobiles. As a result, the Korean car that is the mainstay of cost performance is gradually losing its color. According to industry analysts, compared with the high-quality fuel-efficient Japanese cars and the safety of German cars, Korean cars are in a weak market share. The rise of local brands and the recovery of Japanese car sales have squeezed sales of Korean cars. . If Korean cars want to emerge from the predicament, they need to grasp the direction of development of Chinaâ€™s automobile consumption in the future, and at the same time, they must control the development pace of science and technology in areas such as new energy and intelligent network.

The Japanese joint-venture car companies continued to maintain steady growth in 2017. Dongfeng Nissan, Dongfeng Honda, Guangzhou Automobile Honda, FAW Toyota, and GAC Toyota all continued their growth momentum for the previous year and achieved positive growth of 10.39%, 25.29%, 9.31%, 7.21%, and 4.88% respectively. Sales of French cars represented by Shenlong Motors declined significantly. According to an interview with the media, Shenlong Motor stated that there are many reasons for the continuous decline in sales volume. First, system capacity building does not match the sales target of 700,000 vehicles. The response to changes in the external market environment is not timely, the internal system is not smooth and so on. Insiders pointed out that the problem of continuous decline in sales, the problem is not necessarily in the product itself, marketing accounted for a large proportion of marketing did not do a bit of brand recognition in the consumer is not very high, Shenlong car needs marketing Make major changes and improvements.

In terms of growth rate, compared with last year's most car companies, there were various degrees of increase, including Dongfeng Honda, which had a significant growth rate of 25.29%. At the same time, the luxury car market continued to increase with the continual upgrade of domestic consumption, and BMW Brillianceâ€™s sales increased significantly. The growth rate of Beijing Benz last year was 24.67% and 33.28% respectively.

The machine used is called a squaring shear, power shear, or guillotine. The machine may be foot powered, less commonly hand powered, or mechanically or hydraulically powered. It works by first clamping the material with a ram. A moving blade then comes down across a fixed blade to shear the material.
Metalworking guillotines operate by a clamp securing the sheet of material. Similar to the action of scissors, the blade shears the material, starting at one side of the sheet. ...... In hydraulic guillotines, energy for the tool comes from pressure in a hydraulic ram.